At a time where listeners are looking for authenticity, Niemann is the real deal; heartfelt, honest and uncontrived.  She does for country music what Amy Winehouse did for  the blues/jazz sounds. Winehouse’s music updated the genre with innovative lyrics that appealed to men and women of all ages because they placed you at the scene; as a co-conspirator.

Niemann, has a similar capacity for short, personal, storytelling. Through a series of evocative pictures that explore femininity, maleness, patriarchy, freedom and control, Niemann demonstrates a contemporary talent for energising traditional themes. Gal Holiday’s singing unashamedly grabs the listener by the heart and shakes them to their boots.  Yet, Niemann also sensitively invites you to let the pain come out, whilst placing your heart into the scenes that she has carefully scripted.

Let’s Run Away, The Bottle and the Booze and Ain’t Gonny Buy My Ring

The first song on the Album, Let’s Run Away (V. Niemann), explodes with lust-dreamed conspiracy. It depicts two illicit lovers rendezvousing after dark and sets down a marker; that anything is possible in this album.

Let’s Run Away envisages shadows of casting lights, evokes liaisons beyond the carousel at night and pictures two figures fashioned in starlight. The story of stolen kisses, hearts entwined and a performer in flight, provides an impressively strong start to the album, whilst, also letting you know that, ‘boy, these musicians can play’.

Let’s Run Away taps into the, escape to a lost time that never was, nature of rock-a-billy; It invites you to let your hair down in a Debbie Harry, nonchalant hands on hips, Heart of Glass, shoulder bopping, sort of a way.

Let’s Run Away is also imbued with the edgy anything is possible spirit of  New Orleans that Niemann has referred to as an artsy, funky, bohemian thing (see video clip here).  As such, the song sets down a marker for the spit, blood, sawdust and scandal that will follow in the remainder of Lost and Found’s excellent tunes. 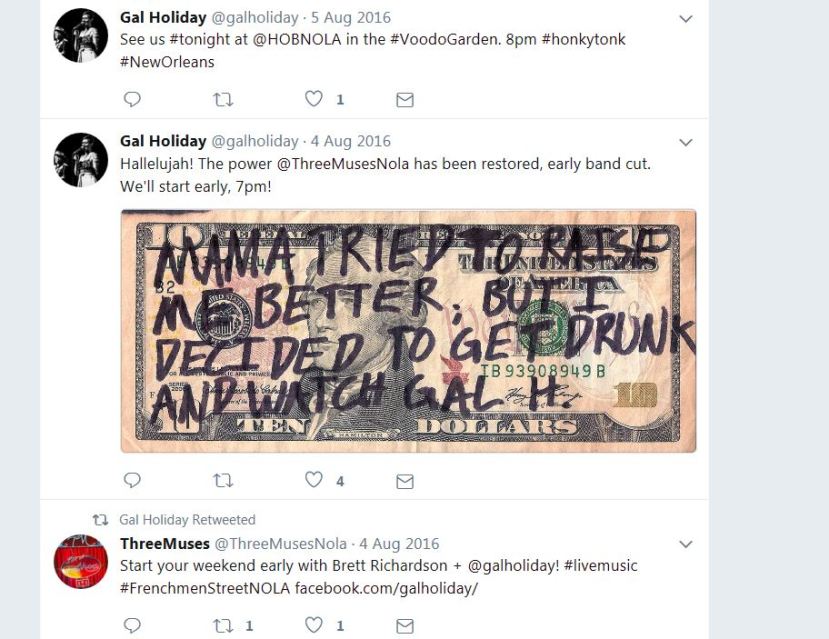 This is ‘speeded up country’ in all its heart rate raising magnificence. Let’s Run Away’s drum stick clicking beginning takes you back in time to Elvis’s Mystery Train and reminds us that Niemann, draws from her expertise on the traditions of this field when adeptly planning how her songs will fuse old and new.

Indeed, the vocal phrasing of the word ‘away’, in some strange way, reminded me of the Jonny Burnette Trio’s Rock a Billy Gal (Rockabilly Boogie) which is claimed to have been one of the first songs to use the words Rock and Billy in its title.

Let’s Run Away is a soul traveller’s fantasy that encourages nomadic type carnality at the same time as indicating that Gal holiday is a ‘Be Bop A Lula’ artist at play, but, not in ‘red blue jeans’ today.

The cover of Lost and Found depicts Gal Holiday in dress well-crafted and pattern interweaved. The dress’s organic shades, shape and tone hint of ancient Celtic connections.  The colours of nature. auburn flowers, green feather like leaves and the deepest of black CD sleeves; remind us of the time, long ago, when people were more connected with the earth, the forests and the rivers. A time when the Brythonic (a language that preceded Welsh) poems of Aneirin and Taliesin spoke of Y Gododdin; an ancient forest dwelling kin, ancesters of the Duneidinach of Lothian.

Let’s Run Away has a sort of visceral, emotive, expressive and physical aspect to it.  It confronts your puritanical notions and expertly blends the short, fast-paced, edgy, irreverent, approach of the punk rock genre with the thoughtfulness of Ameripolitan introspection.  Niemann, who was recently referred to as the Punk Rock Patsy Cline. is adept at singing Cline’s slower songs:

The book, ‘A Boy Named Sue: Gender and Country Music’ praises Patsy Cline’s approach to her work for creating a ‘bricolage’, an assembly of meanings, that can be variously read, at varying times, by various people. Lost and Found, whilst continuing to add to Niemann’s bricolage, also has a strong underlying message of regrette rien.

The 2nd track of the album The Bottle and The Booze (V. Niemann & D. Williams) tells of consequences when we attempt the escapism of Let’s Run Away.  Presenting hepatic and alcoholic, rather than tragic and melancholic, images of a person who is led astray and ends up in bed with someone who may be promised to another, ‘Thought that I should have one more, figured I’d be fine. Woke up in another’s bed, with one who aught a mind‘.

The story of silk, gin tinged blues and honey rued, sends a message that this character is used to paying her Honky Tonkin’ dues, but also leaves the questions why? Could it be that running away didn’t work out and Gal is now working through the consequences?

Let’s run Away involves a relationship of equals and The Bottle and the Booze  depicts an errant woman who has a fling when she is out too long after midnight. Ain’t Gonny Buy My Ring (R. Cangelosi) continues the relationship sagas but, this time, Gal is squarely in control; nailing the foolishness of her indolent partner’s crooning:

‘There’s a gleam in your eye,

I don’t know why,

I don’t know what you’re taking.

Your down on one knee,

And already getting naked.

I care for you, my dear,

You know I do,

But there is just one thing:

But I ain’t gonny buy my ring.’

At times, the songs in Lost and Found  have a beautiful ambiguity to them, particularly later in the album. But, Aint Gonny Buy My Ring has a wonderful clarity that demonstrates Gal’s Honky Tonk humour majestically.  When Gal discerningly sluices her partners crooning juices but does not come up with gold nor diamonds, you know that his gleam in his eye ain’t going nowhere.

It is as if we are watching Gal, in a crowded bar, confidently and without superficiality striding over to take the beer from her ring-less lovers glass, downing it in one, and burping, before turning to acknowledge the applause from an admiring audience.

Thoughtco.com suggests of Honky Tonk that ‘The typical song of the genre is mired in hopelessness, both romantic and alcoholic; much of it is music to drink and cry to’.  But, Gal encourages us to also laugh at the hopelessness of the situation and appreciate Gal’s partners ridiculousness.  Aint Gonny Buy My Ring variously depicts Gal as: gallantly earning the bacon, humorously pointing out her partner’s inadequacies and raucously pricking his male vanity.

We learn from these three songs, Let’s Run Away, The Bottle and the Booze and Ain’t Gonny Buy My Ring, that a liberation of the heart frees women up to try out different types of relationships. But, that, as the philosopher Hume taught us, there is no such thing as total freedom; all relationships have consequences.

In a feminist sense, Aint Gonny Buy My Ring subverts the ‘male gaze’ by having us imagine the fiancé in a drunken disrobed state.  In so doing, it places the woman in the role of observer and commentator; to indicate that Gal is in control, she will decide when the clothes come off and how far this relationship is going.

Ain’t Gonny Buy My Ring builds on a tradition within country music where women chastise men.  For example, Lorretta lynn’s Don’t Come Home A Drinking also tells the partner off but, still, has the female character crying all alone.  Similarly, KT Oslin’s Do Ya, poses questions to her lover but concludes that she still loves them.

Niemann’s tune is much more contemporary because it sets out that the woman is in charge.  So, if you like your women wearing the trousers, there are songs in this albums for you.  Indeed, Niemann is a mature woman who’s strong character, distinctive style and powerful vocals make her music quickly recognisable.  And, Niemann is nearing the age where K T Oslin broke through to a much wider audience, by singing songs about her life, asserting her identity,  painting pictures of dreams denied and, also by talking of how she became liberated from the shackles that men might have placed on her.

You sense, when considering the development of Gal Holiday over the course of her albums, that Gal has always been a child of nature, constrained for a time, then liberated to fly with the wind and just see where it takes her. In powerful songs like Let’s Run Away and Ain’t Gonny Buy My Ring this current album continues that feeling of liberation, but, Lost and Found is also different from her other albums because Niemann is able to draw on the introspection of the Outlaw genre to explore Gal’s melancholy, indicate that our sense of liberation doesn’t always take us where we want it to and talk to us about Gal’s inner frustrations.

There seems to be a clearer purpose to this album; that we should understand that power and vulnerability are two sides of the same coin and that whilst Gal has a strong sense of self-esteem she also has moments of doubt, hesitation, nervousness and soul-searching.

You can buy and download your copy of Lost and Found here.

Our next installment of this review will examine some of the soul-searching songs on the album, discuss how they enable Lost and Found to pass the outlaw ‘lived it’ test and how this shift has enabled Niemann to produce outstanding songs about Gal Holiday’s thoughtful and often tearful growth.

Part Three: When Melancholy Collides With Specificity It Makes You Cry,